Are You Kidding Me Hillary Clinton?

by Hillary HicksSeptember 16, 2016
Now Reading
Are You Kidding Me Hillary Clinton? 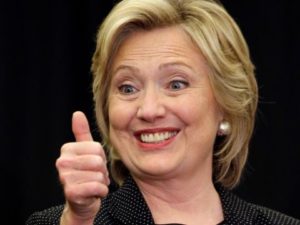 Ok, so I admit, Donald Trump isn’t exactly the most inspiring presidential candidate.  He probably won’t be lumped into categories randomly with George Washington or Abraham Lincoln….but are you kidding me, are we actually considering electing Hillary Clinton?  I just threw up in my mouth and swallowed it.  What amazes me about the American public is that we continue to follow a path of self destruction, one that feeds into an unsustainable growing population of those who can’t support themselves to feed systems that allow for this inefficient and self-depleting machine to continue to self-implode.  Yes, I know that was rambling a bit, but you get the point.  How many Detroit’s….or Chicago’s……or California’s do we need to have in order to prove that a liberal, non-business friendly environment doesn’t work?  There is a reason why these governments are losing jobs, tax revenues and going deeper into debt every year and markets like Texas, Georgia and Florida are doing better every year – support businesses and you give them reason to bring jobs to your market.

Ok, I’m a capitalist, but I also have feelings, I get it.  We do need to take care of people, we do need to have an environment that has rules so as to avoid a developing country type environment where only a small percentage of people have all of the money.  But the way that human nature works is to make people compete and to have successful people be able to earn more and realize more.

Simplify tax codes so that the rich pay the same percentage as the middle class and the poor %-wise, which adds up to a much larger sum of money.  Stop feeding into the welfare class and people who don’t understand what a bad system has turned them into.  When someone has been on welfare for over 30 years, it isn’t their fault any more, it’s a broken system.  Don’t blame the mouse when you put the cheese behind the wrong door.

Hillary Clinton is more of the bad we’ve had now for 8 years with a guy who created the worst possible healthcare system the planet has ever seen.  It increased the average cost of healthcare, polarized the relationship between employers and employees and forced innovation to fire more employees in order to avoid healthcare costs for larger workforces.  I recently interviewed a British business man who confided that he was thinking about moving his business back to Britain because the taxes for him were almost even between the U.S. and the U.K.  That is a sad statement to say that we have almost equalled the European economies which are almost completely destroyed by liberal policies and socialist movements.  (If you don’t believe me, try opening a business in France).

If Hillary Clinton gets elected, I don’t think the U.S. will explode, I’m pretty sure the American Economy is strong enough.  But I do think that there will be enough bad decisions made to affect a good portion of people.  More businesses will be forced to send money overseas to avoid tax ramifications (Apple), more businesses will ship jobs to Mexico (Ford) and more Texans will vote to leave the Union this upcoming election and it’s hard to blame them!

I know it’s hard to admit that Donald Trump is the best decision, this is not a pro-trump piece, it is an Anti-Clinton piece.  Don’t feed into the political machine, we need better businesses, more jobs and more reasons for businesses to hire people in the U.S., not more welfare programs and larger government.